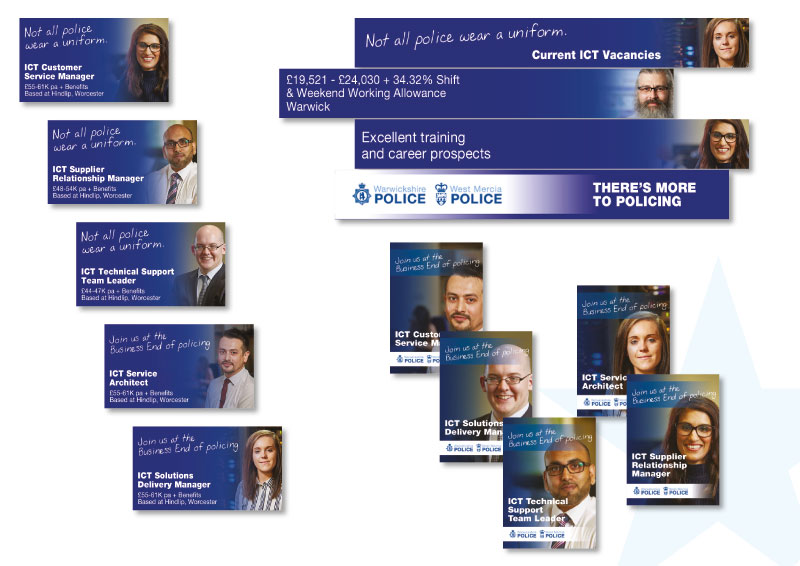 Warwickshire and West Mercia Police (W&WMP) forces had five senior roles to be filled as part of a pioneering partnership between the forces.

The W&WMP Alliance was already a leading edge / exemplar national initiative for the policing model of the future, which offered economies of scale and significant benefits to the individual forces, their communities they serve and of course the people that work for them as the scale is now much so much larger.

Back in 2015, a Home Office report ‘Blue Light Works’ made a range of recommendations to improve the way police forces worked. A key aspect of this was around technology, setting out new ambitions for ICT, and adopting a holistic approach from design to implementation. The benefits of such an approach would be huge, improving the flow of information from central command centres to police on the frontline, and also between forces. One aspect the report highlighted was the challenge of finding the right people. A degree of ‘upskilling’ was required to achieve the goals laid out in the report, and this advertising campaign was the first steps towards satisfying this challenge.

This initiative at W&WMP was backed by significant investment, with one brand new Control Room being built and one being completely re-furbished; a control room shared with the Worcestershire Fire Service (again a national first) as part of a Home Office funded pilot scheme; and mobile tech, such as smart phones and Automatic Number Plate recognition. In order to protect the communities they serve, there is a direct link between technology and what frontline police officers can do.

One of the greatest challenges the Alliance was keen to address was to introduce some of the thinking and best practice which would be prevalent in large commercial businesses into policing ICT. In the past such goals had only been met through specialist staffing agencies. On this occasion, the Alliance wanted to go directly to market.

WDAD was engaged to help position W&WMP as an employer of choice that would attract a diverse range of people to a variety of roles including ICT.

Many of the target audience would not be aware of the range of career opportunities available in the police. In fact many will think that uniformed roles are the only ones that the forces would ever advertise for. Therefore WDAD developed a concept with a simple message designed to challenge that perception and highlight the full range of opportunities available and the variety of skills (and people) that the Alliance needed to fill them.

The IT leaders they wanted to attract were unlikely to have previously considered a position in the police and consciously or subconsciously, they would be asking themselves a number of questions about what it might be like to join the police. In many cases, they would be making wrong assumptions that would lead them to the conclusion that they’re not right for the police when, in fact, they most probably would have all the necessary experience and skills the Alliance required.

We therefore came up with a creative proposition called ‘There’s more to Policing’ which was designed to address their misconceptions head-on through a series of personal quotes. By highlighting their apprehensions and giving them straightforward answers, we not only allayed people’s concerns, but we did it in a very human and welcoming way.

This personal approach – using real people, doing real jobs and their actual quotes presents the Alliance as an approachable employer that offers a variety of opportunities for people with diverse skills and expertise.

WDAD produced full copy to appear on the forces’ website https://www.westmercia.police.uk/ICTjobs  We focused heavily on the investment made and still in the pipeline, and the highly technical nature of the projects the individuals would be managing that would be right at the heart of protecting people from harm:

Policing is about more than, well, policing. Which is why we’re looking to the future and investing in the ICT that will transform public safety for the benefit of everyone. Our pioneering Alliance is already leading the way in shaping the future of the force, helping us to be even more efficient and effective. Now, our renewed focus on shaping, innovating and investing in the IT that will transform how we police across our joint region. For you, it’s creating exciting opportunities to inform, influence and implement truly revolutionary services and systems where they will have most impact…

As well as five full job adverts, abridged copy was produced for a generic advertisement to appear on three contracted generic job boards.

Finally, we also produced a series of online banners and MPUs that would be used across the W&WMP website and its social media channels.

The campaigns drew in the following response:

From those numbers, all positions were successfully filled with a high-calibre candidate. Four of which came from the private sector.

Historically when the forces had tried to recruit directly for ICT positions, response numbers and quality had been low and positions had been ultimately filled via recruitment consultancies. This was the first time, using a creative approach that such a route to market had not been used.

As such the Alliance had filled five senior ICT positions in a difficult-to-fill sector for just over £200 each, and saved a minimum of £67,000 on agency fees if it had gone down that traditional agency route. A fact recognised by the PPMAs where the campaign has been shortlisted in their Best Value for Money recruitment campaign category.