Stagecoach – Engineering Apprenticeship Scheme: All Aboard! 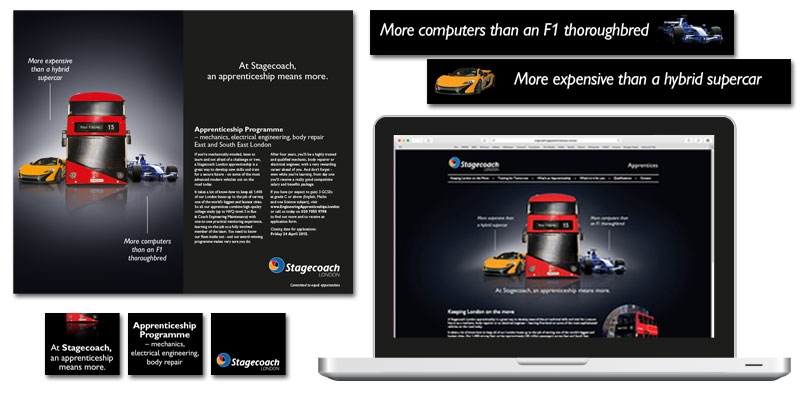 Engineering Apprentices – all aboard!

WDAD Communications were appointed by Stagecoach London to revitalise the attraction piece for their award-winning national apprenticeship scheme which in 2014 had failed to fill all their vacant positions in London. Our objective was to find 10 apprentices for their three schemes – Mechanics, Electrical and Body Repair – all based at their 9 garages in East London and Kent.

There were lots of positives on offer which we needed to communicate in a far more engaging way:

But at the end of the day, would our target audience think buses are interesting enough? We interviewed a number of current and recent Stagecoach Apprentices and decided that we needed to keep the creative concept simple – but at the same time make it ‘sexy’.

We found individual photographic images of two cars the target audience could relate to and composited them together with a Stagecoach bus to produce a single highly stylised shot, the likes of which one might normally associate with new car brochures or glossy motoring magazines (we even changed the bus number to one that appears in the local area to add to the conscious/subconscious recognition.)

This contrasting image was supported by the strapeline:

At Stagecoach, an apprenticeship means more.

The proposition being that a Stagecoach apprenticeship offers exposure to serious, state-of-the-art and green tech stuff to rival any/most engineering environments – the future is happening here.

Our campaign needed to appeal to two target audiences; the apprentices themselves and their parents. We therefore focused on local print and online press and launched our creative recruitment ads to coincide with the National Apprenticeship Week. We also used www.notgoingtouni.co.uk and two PPC campaigns on Facebook restricted to 15 miles of the garage locations.

Finally, we wanted to give the campaign its own ‘space’ so created a was a very simple, but effective campaign page: www.engineeringapprenticeships.london. All traffic was driven to it (where for the first time Stagecoach could track referring sources) and interested candidates could undertake an instant telephone screen.

The campaign site received over 1,000 unique visitors over the first month of the campaign and all the initial five scheme places were successfully filled. The second tranche of recruitment started at the end of August with three roles commencing in October and two more are in the pipeline for next month.

Over the life of the campaign the site received over 5,500 unique visitors and there were 232 applications – a 29% increase on the numbers from the previous year.