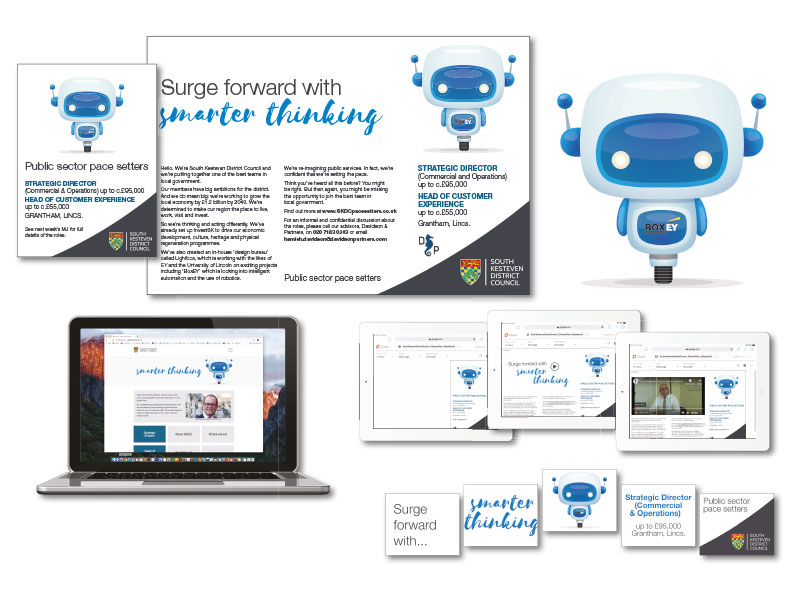 SKDC had ambitious plans to meet the economic and political challenges it faced in what were, and remain, challenging times for as a small district council. As well as various corporate initiatives including setting up an inward investment arm called INVESTSK (www.Investsk.co.uk); an inward-investment body more typically associated with larger councils and metropolitan boroughs, and the establishment of ‘Lightbox’; an in-house design agency/development team (or innovation lab) tasked with thinking outside the box and developing new ways of doing things – and generating revenue, they were now looking to recruit to two senior roles.

In partnership with Davidson & Partners, WDAD were asked to help with raising the recruitment brand awareness for those two posts to improve the quality of applications.

The campaign had a number of objectives:

We wanted to make an immediate impression, and that meant avoiding the very stereotypical (and easy) approach of using lovely images of the rural location. We also wanted to avoid the rather clichéd approach of pictures of end-service users happily smiling to camera. Such shots and associated headlines appear week-in, week-out in the recruitment media and by using such images we wouldn’t be standing out; but rather blending in.

We therefore developed a somewhat more intriguing creative concept which used an illustration to represent the AI robotic automation project run by Lightbox. ‘Boxey’, as it was affectionately known, would feature prominently in the advertising, both as part of the main messaging, but also as a teaser, to raise levels of curiosity and interest. It would also appear on a dedicated recruitment microsite to accompany the campaign.

In conjunction with the illustration, we used the Selima script font, which is also very different to the typical typography used by local councils and even before the message would have been considered, it gave SKDC a very strong point of differentiation in the media.

In terms of content, we wanted to convey that South Kesteven District Council wasn’t standing still. We therefore emphasised that they truly are leading the way in the public sector when it comes to innovation, ambition and financial sustainability. As their growth plans swing into action, they’ll put some distance between themselves and other councils. The headline contained a reference to the speed at which the council is progressing – Surge forward with smarter thinking – and was a call to action for the audience, creating a sense of empowerment and excitement at what applicants could achieve in the roles.

Finally, we created a strapline which encapsulated the brief in a very succinct and meaningful way: Public sector pace setters.

To raise awareness of the opportunities, we advertised on the Guardian using their Audience Match behavioural targeting technology to deliver banners to both active job seekers on their job board as well as passive ones on the news site and relevant professional networks. The inventory also included innovative video banners. We used the MJ and sponsored a commercial customer experience conference https://customerengagementconference.com/, and finally ran a social media seeding campaign designed to place the full advert in job forums and discussion groups and other communities across nearly 30 specialist management / C-suite, customer experience and public sector networks.

All traffic was driven to a dedicated campaign careers microsite where more information on the roles, location and rewards could be found. One interesting feature of the site was the use of two videos from the Leader of the Council and the Chief Executive. Neither had high, glossy production values, but were deliberately shot in a very down-to-earth way to convey an honest and authentic message from both individuals as to why someone should consider joining SKDC.

The campaign ran from the start of July through until the middle of August and was highly successful filling both advertised posts, and because of the quality received, another was appointed to a specially created additional role.