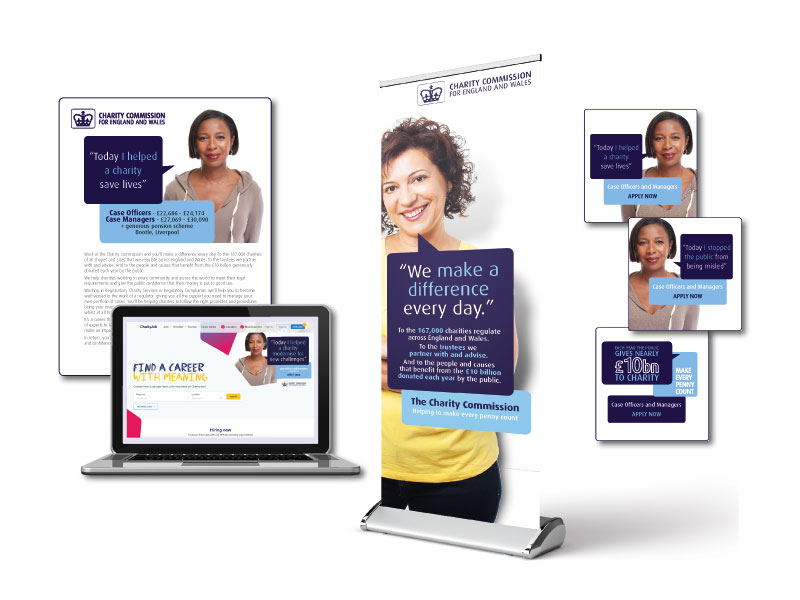 The Charity Commission regulates and registers charities in England and Wales. In 2018 ambitious plans were announced to recruit c.85 new employees over a 12 month period – an increase in total numbers of around 25%. A significant number of these new roles were for hard-to-fill Case Workers, Compliance and Investigative positions. Locations included Liverpool, London, Newport and Taunton.

The Commission had rarely advertised outside of the Civil Service, so there was no established external employer brand messaging.

We conducted a series of focus groups across several locations with existing employees and organisation Directors. This allowed us to establish interim organisation Values to be included in campaign messaging and a values-based assessment process.

We then worked closely with Recruiting Managers and senior stakeholders to define the employer brand staples and the key messages needed in the recruitment campaign.

We also provided demographic research on the Liverpool area, specifically to inform a strategy to recruit more people from BAME groups.

Once these were agreed, we produced a series of creative advertising templates and a media schedule for a campaign that utilised regional press, local press advertorials, regional radio, national and trade job boards, graduate media and in-house promotion.

Phase one of the campaign ran from April to July 2018 and generated over 1,000 applications. The agreed values were used in the assessment process and the Commission were able to fill 95% of their vacancies.